This is a piece of Interactive Fiction that I created as part of the "My First Game Jam: Winter 2018".  Built using Twine. Read the Devlog here if you're curious about the process of development!

In total there are 3 Endings, 4 Narrative Paths! About ~10 minutes total total to play through depending on how fast you read.

If you enjoyed the game leave feedback!! Thanks. :)

I enjoyed playing this, the story really sucked me in.

Nice work! My only criticism would be that a lot of the hyperlinks just moved along linearly, and as such probably could have been combined into one node.

Regardless, I enjoyed it. Short and to the point, with an interesting voice. Keep up the good work!

Hey! Thanks for the feedback. :)

I largely agree with the criticism. Looking back, I multiple endings was somewhat of a mistake.

I would have liked for the story to progress in a more interesting fashion. During development, however I was somewhat limited by the time frame of the jam which this game was first created. It was hard to rewrite and expand some scenes to be more varied without radically changing the narrative. Without getting into spoilers, it's tough to expand beyond the experiences already present in the game.

Furthermore, during initial playtests, I found that people appreciated the emotions within the game conveyed through it's conciseness. That is to say, there didn't need to be more for the emotions/themes to be understood. I think for these reasons I was less concerned about creating more interesting paths for the player.

Thanks again for the support! :) I appreciate knowing and growing from hearing about people's experiences playing the game.

I've always loved using Twine, it just had such a relaxed workflow.

Keep up the great work! 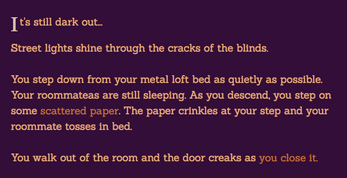